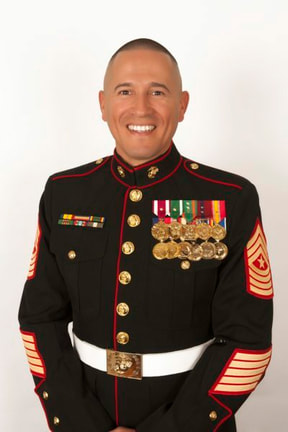 SgtMaj  Max A. Garcia
Motivational Speaker, Author, Life Coach
US Marine Corps Veteran
Specializes in building self-esteem and confidence, overcoming adversity, leadership, and rapid career advancement.
​​​Max Garcia joined the Marines in 1994 as an Amphibious Assault Vehicle crewman, later becoming a Drill Instructor in 1999. In 2003 and 2004, he deployed twice to Iraq with 3rd Assault Amphibian Battalion and was awarded the combat action ribbon, and a medal for Valor from General Mattis, who recently served as the US Secretary of Defense.

From 2006 to 2009, Max was an ROTC Instructor at the University of South Florida and a Drill Instructor for Officer Candidates. He then deployed to Afghanistan in 2010.

From 2012 to 2014, Max served with Fleet Anti-terrorism Security Team (FAST) Company Europe, in Spain until selection to Sergeant Major, the most senior enlisted rank in the Marines. He then transferred to Okinawa, Japan deploying to multiple countries in the Pacific. Max has traveled to all 50 US states and over 65 countries.

In 2017, Max Garcia returned to the 3rd Assault Amphibian Battalion, Camp Pendleton, California. He recently became a published author in the Amazon #1 Best Seller “The Abundance Factor” with Joe Vitale who was featured in the movie “The Secret”.
​
Max recently retired from the Marines to pursue life coaching and inspirational speaking.
See what they are saying about Max
LtCol Eric Malinowski –
SgtMaj, An hour ago I got a phone call. I was selected for colonel. I wanted to send you a note – my first, outside family – to thank you for making this possible. I know my selection for promotion is representative of your abilities as a true professional, and of the abilities of the Marines and sailors, you represented in the command. I was blessed to have an amazing group who made me look good.
Sergeant McMillan, Christopher M.-
Good morning 1stSgt, It’s been a while since I emailed you last. I was just going to DI School. Well, I’ve been on the Depot for about 2 years now and just wanted to hit you up to see how things are going over there where you’re at. You know it’s funny because I use things here that you taught me in Recruit Training. Back when you were my “Heavy”. I still remember some ditties we used as recruits and I used those same ditties when I was a “Heavy”. When you became my Senior Drill Instructor, I find myself leading the same way you did. So, hindsight being 20/20, I thank you because it made me become a successful Marine and Drill Instructor. I still have another year on the island. I don’t think they’re going to send me on quota though. They’re talking about working me 8 or 9 cycles straight. Semper Gumby! If you don’t know, about a year ago, 3rd BN moved to new squad bays right across from the RTF. They’re a lot bigger than the old ones. I picked up 98 recruits this cycle. As a 3rd BN “Hat” you know we normally push smaller platoons. A lot smaller. Anyway, 1stSgt, hope everything is well and Thanks again for everything! Semper Fidelis!
Captain Scott Dustin-
I want to thank you for being such an influence on me early on and continually as I watch your rise and inspire more. I don’t need to tell you to keep raising the standard for me and those to come because it is undoubtedly a primal part of your character. I assure you that you have the most definitely awakened a spark in me and I am reminded daily of its power as I try to do the same to as many I can. That SgtMaj concluded with some math and how 141 graduates could affect over two-thirds of the Corps through impacting directly or indirectly 10 others, and so on and so on until the number of affected Marines peaked over 153,000.
Thank you for what you do and through communication between us can be distant I wanted you to know that I still speak of you frequently and how my AMOI shaped me and countless others. How the MECEP program is so crucial not only for the MECEP Marine but for ones like me and giving midshipmen their first experience with enlisted Marines, lessons that I don’t think are barely touched on at TBS nor can be learned in a classroom.